favoriteDid you know that Eolymp is maintained by a non-profit organization? We do not receive any profit and provide our services free of charge to everyone. Click to learn more.
Competitions

Astronomers often examine star maps where stars are represented by points on a plane and each star has Cartesian coordinates. Let the level of a star be an amount of the stars that are not higher and not to the right of the given star. Astronomers want to know the distribution of the levels of the stars. 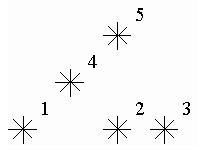 You are to write a program that will count the amounts of the stars of each level on a given map.