Kunai is an acuate weapon used by ninjas whose shape is similar to a knife. Ninjas were attacking their enemies by throwing kunais against them.

There are N ninjas in a grid of squares with W columns and H rows. Every ninja is in the center of a square, and no two ninjas share the same square. Each ninja has a kunai, and looks toward one of the four directions; up, down, left, or right. At time 0, every ninja threw his/her kunai to the direction he/she is looking toward.

Every kunai proceeds straight with speed 1. If more than one kunais come to the same place at the same time, they clash each other and disappear. The size of a kunai is so small that we can ignore it. Also, since ninjas can move quickly, they will not be hit by kunais. Each kunai continues to proceed along its direction without losing its speed unless it is clashed with another kunai.

Count the number of squares in the W×H grid where kunais pass through after a sucient amount of time passed.

The ﬁrst line contains two space separated integers W, H, which describe the size of the grid. The second line of input contains an integer N, the number of ninjas. The i-th line (1 ≤ i ≤ N) of the following N lines contains three space separated integers Xi, Yi, Di, describing that the position of the ninja i is in the Xi-th column from left and Yi-th row from above. No two ninjas share the same position. The direction of the ninja i is described by the value of Di.

Output the number of squares in the W×H grid where kunais pass through after a sufficient amount of time passed.

In this example, the grid at time 0 is described as follows. 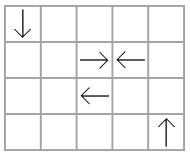 The kunai thrown by the ninja i is denoted by the kunai i. At time 0.5, the kunai 2 and the kunai 3 will clash each other and disappear. The following ﬁgure describes the grid at time 1. Here gray squares denote the squares where kunais already passed through. 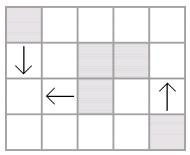 At time 2, the kunai 1 and the kunai 5 will clash each other and disappear. The grid at time 2 is described as follows. 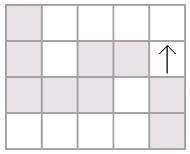 No more kunais are clashed in a square after time 2. The grid after a sucient amount of time passed is described as follows. 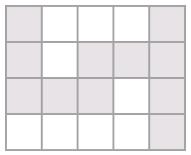 Finally, the number of squares in the grid where kunais pass through is 11. Therefore, we should output 11.